UPDATE: THERE ARE NOW SIGNS UP FROM BC PARKS STATING THERE IS A FINE FOR USING THIS TRAIL!

Brandywine Falls is located in Whistler,  BC and a lookout of this majestic waterfall can be easily located through Google Maps. Previously I had visited this lookout many times, but never hiked to the base. To make the most of a long weekend, my friend Hailey joined my parents and I on a trip to Whistler. Though this hike can be a bit far from Vancouver for a day trip, the drive is unparalleled in beauty. Throwing on a fascinating podcast (I’m a true crime fan!) and stopping for coffee in Squamish definitely made the time fly by!

From the Brandywine Falls parking lot in Whistler, it is a short walk over train tracks to the lookout. The lookout platform has been very busy both times I was here, making it a bit difficult take pictures. However, the crowdedness is well deserved as the view is astounding:

To access the hike, you must continue walking past the lookout and follow the chainlink fences until you reach the last fence. The trail you will embark on is smaller than the main trail that led to this point and less worn, but still relatively easy follow. 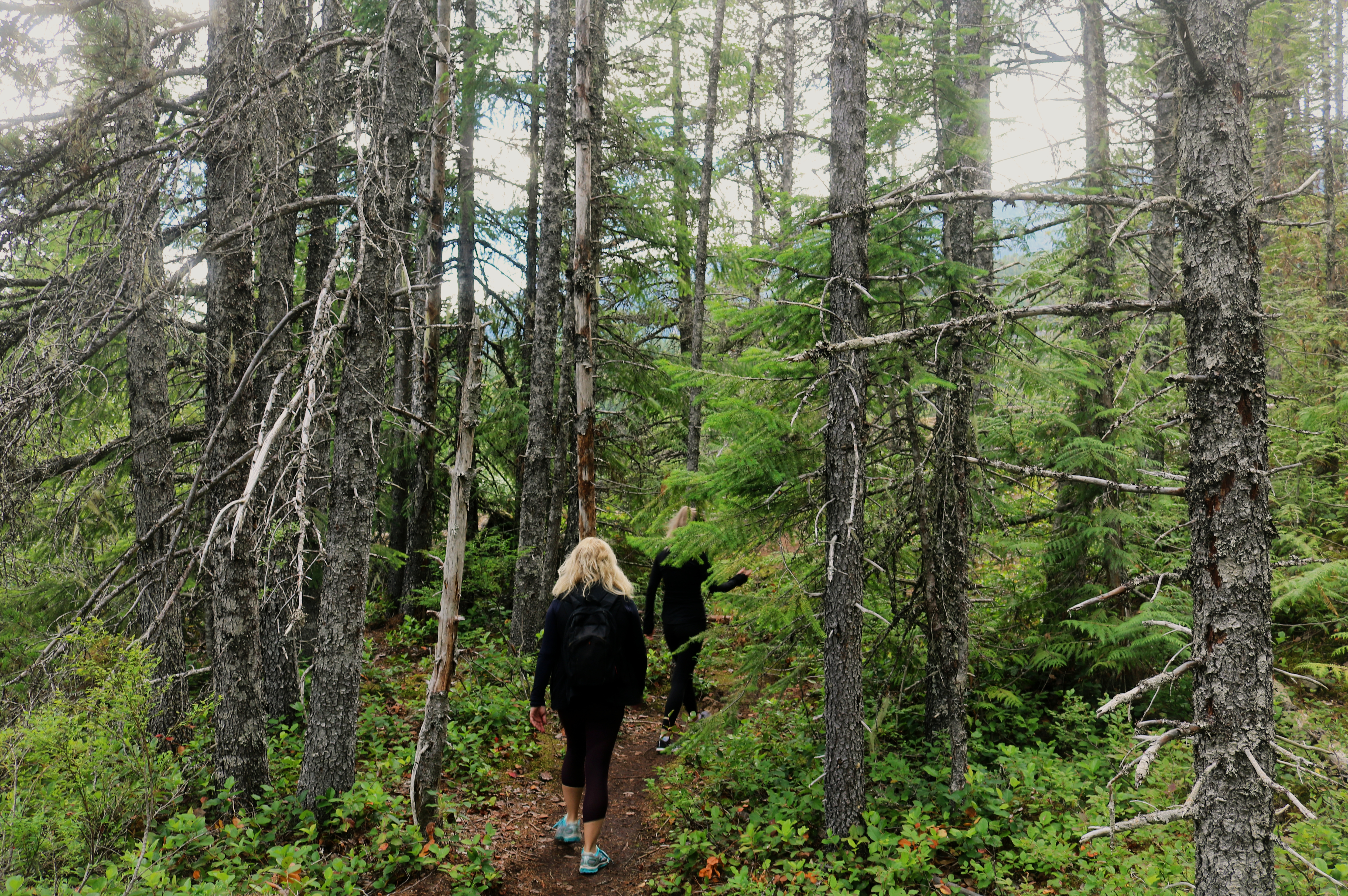 The first part of the hike follows the small path through the forest and then leads to a steep rock embankment and little view point. It is a gorgeous spot to stop and snap a few pictures.

Online I had read about a “sketchy rope clamber”. We were a bit worried about what this portion of the hike would be like, but we were pleasantly surprised. The rope itself was perhaps a bit sketchy but completely unnecessary! We just climbed down the few steep rocks and on our way back used the rope for fun. 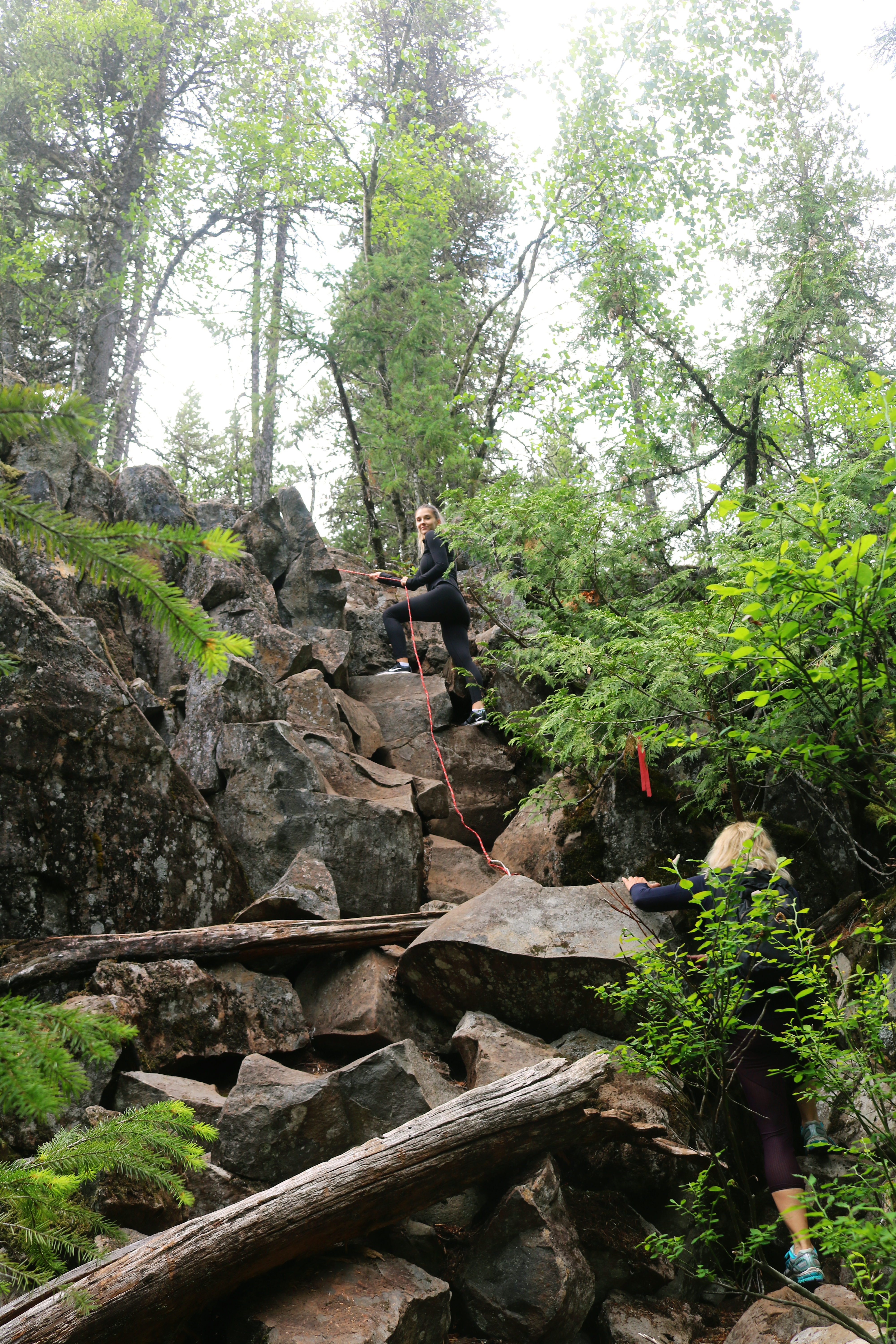 After this portion of the trail, keep an eye out for ribbons hanging from branches. They will help you stay on track as this trail is easy to accidentally wander from. It is almost like a game of “Where’s Waldo”, trying to find the fluorescent ribbons camouflaged in a sea of green. We initially followed the pink ribbons. This route is much more difficult and not one I would recommend, as it requires hiking down/up steep, unsecured rocks. Though not challenging in an endurance sense, this path required careful agility, forcing us to travel more slowly than the other route.

We followed the orange ribbons on the way back as we had spotted enough of them to know the trails ran parallel. The orange ribbon route led through the soft forest bed which I personally found more scenic and we made significantly better time. The two paths meet in the forest and it is only a short distance to Brandywine Falls.

The view was spectacular. Hailey described it best, “It’s hard to believe something so amazing can exist here on earth”.  I couldn’t agree more. In the very least you feel as though you are in a tropical, magical place like Hawaii. It is truly an inspiring experience.

We went almost right up to the waterfall as we thought this would be the best place to take pictures. We clearly did not think it through. Water sprayed everywhere and immediately we were soaked and the camera was too. The wind was also very strong up close to the waterfall and would gust at us. We were quickly freezing! We found the best spot to take photos was a bit farther back as you were still able to capture the waterfall fully in all its wonder while not having to compromise based on the elements.

I can not recommend this hike enough. I was expecting the hike to be longer and more difficult based on what I read online. It was less steep than I expected though the terrain on the pink ribbon trail was a bit worse than I anticipated. As long as you follow the ribbons, it is quite easy to stay on track and not get lost.

It is hard to gage exactly how long the hike takes because we spent plenty of time taking pictures. However I would estimate around 1 hr (round trip). My mom’s apple watch recorded the hike as 3km in distance.

The waterfall is oh so dreamy and mesmerizing. It’s a perfect spot to take friends/family visiting from out of town or check out yourself to knock it off your bucket list. This hike truly encapsulates BC’s beauty!

If you’ve checked out the hike already or do soon, please let me know what you think! I would love to hear your thoughts!

View all posts by Discovher